One World Bank insider told me that Bank officials often misuse the word as short-hand for "low-impact." That kind of imprecision lulls officials in addition to public into thinking ROR projects would be the gold (or green) round: hydro jobs that create power but minus the bad effects. Since the term seems therefore innocuous, ROR projects typically don’t have the amount of scrutiny they require. Therefore the the fact is, run-of-river dams are certainly not low-impact.

The Himalayas are perforated by run-of-river tunnels where lake flows tend to be redirected to powerhouses, bypassing river networks for often dozens of kilometers. India’s Teesta River is undergoing a ROR increase that, when complete, might find more of the river circulation though tunnels compared to lake station itself. These ROR schemes divert some, and/or all, of a river’s movement, frequently causing changes to a river’s temperature, velocity and depth that may entirely kill off the normal life in a river.

Long extends associated with the Teesta River in India’s Himalayan area are now being dewatered and fragmented by the dozens of river diversion systems which are built, prepared or under construction.

In addition, so-called “peaking” ROR projects tend to be wreaking havoc on communities and aquatic life. Unlike the diversion tunnels, these projects often store a river’s moves behind a dam through the day, simply to be circulated all at one time at night to come up with power during top energy demand. These daily variations between drought and flooding are incredibly disruptive to river ecology. Much more tragically, these unanticipated releases are making drownings a typical occurrence for downstream communities in Asia. 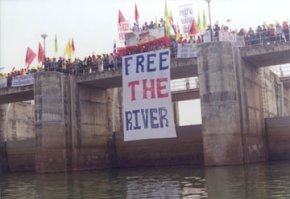 And just like conventional dams, all run-of-river tasks stymie the life span period of migratory seafood.

A new function in The Economist highlights the perils of dam construction on one regarding the world’s biggest waterways, the Mekong River, in which Laos is building the Xayaburi and Don Sahong Dams. These will be the first two of eleven dams planned in the lower main-stream of this lake, all of these tend to be classified as “run-of-river” jobs, despite sizeable reservoirs. Laos’ downstream next-door neighbors fear the dams’ impacts on seafood communities and agriculture that maintain the livelihoods and meals protection of hundreds of thousands and also voiced strong concerns over the jobs. The Government of Laos, in exchange, features pointed towards the reality these jobs tend to be run-of-river in an attempt to downplay issue over their particular impacts. In the event that complete suite of dams is built, they'd change over fifty percent regarding the vibrant lake into a few stagnant reservoirs.

Although issues aren't going away. Actually, they were recently echoed in a write-up inside prestigious mag Science, which increased the security in regards to the risk of major biodiversity losses by run-of-river projects on the world’s great rivers – the Mekong, the Amazon and the Congo.

In short, there’s nothing innately much better about run-of-river jobs. If anything, the term is a greenwash for some profoundly destructive jobs. The upshot? Don’t be fooled because of the name: All ROR projects deserve the exact same exacting scrutiny as any dam.