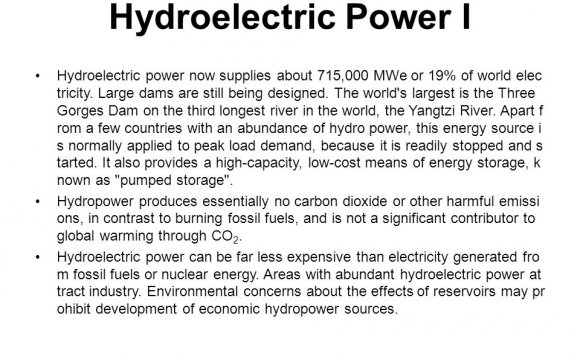 Before contemplating “Can we create electricity from a large amount of water?”, I do believe it would be appropriate when we look into the question “which are the elements upon which generation of electrical energy from water would depend?”.

Now, for a Hydroelectric Power Plant to work, extent and/or amount of water used isn't a very important element. What truly matters is the power with which liquid strikes the turbine blades, due to which it rotates in addition to electrical energy is produced.

So, if a Hydroelectric Power Plant will be setup taking care of the amount of liquid generated by oil wells these need to be kept very first at a beneficial height then hurried to your turbine blades.

Now arriving at your question again, there's no fixed quantity of or quantity or number of liquid needed seriously to operate a Hydroelectric power-plant, it all varies according to the turbine.

For-instance, I'm making a tiny Hydroelectric power-plant when you look at the backyard of my house at a hill the thing I'll see usually a tiny stream of water upon which we'll setup my plant and a small turbine. Now this setup wouldn't normally produce a great deal of electric power required, but yes it can create some to light a little Light-emitting Diode bulb.

Whereas basically would you like to generate electrical energy for the whole town, i am going to setup a far more larger turbine on a fast streaming river.